Home > Apples to Apples: Cidery Offers Another Unique Night Out In Bellefonte

Apples to Apples: Cidery Offers Another Unique Night Out In Bellefonte 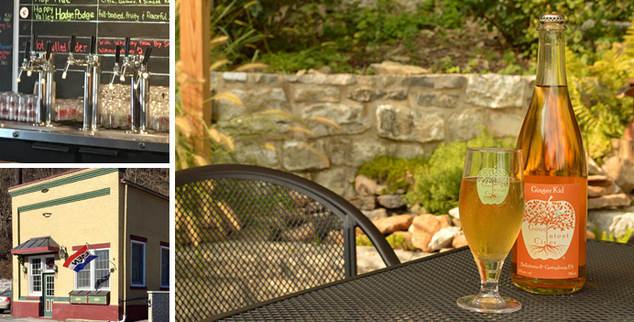 Adam Redding doesn’t necessarily like to use the word “hard” to describe a product most folks have come to know as “hard cider.”

Perhaps it’s why he named his cidery, located in a cozy little building and nestled just across from a calm, quiet flow of Spring Creek along South Potter Street, Good Intent Cider.

“I always knew this building was down here,” Redding says. “I remember looking in the windows of this place and thinking, ‘It would be really cool to have a cidery in there.’ At that point, I was just dreaming.”

Then, nearly five years ago, he had just delivered his first bottle of what’s become his flagship product — Adams Apple — to a local restaurant. Redding had to cut out a label proof — not the finalized version, mind you — and slap it on the bottle himself. Fast forward to today and Good Intent Cider is chugging along nicely. The Cidery has been open since 2014 and Redding usually finds it’s packed just before 7 p.m. most nights.

“I think what people find interesting here are the other customers,” Redding says. “We appeal to extremely diverse group of people. No one knows enough about cider yet to say what a cider bar should look like, or even what a really good cider should be, and that’s what’s left it up to us and our customers. That’s been one of the best parts about this - I’ve met so many nice people from all walks of life. It’s pretty amazing.”

The cidery had developed a following thanks to the consistency of its products. Adam’s Apple and the bourbon-barrel-aged North Meets South, are mainstays on tap. But there’s always a revolving variety, Redding says. Expect to have at least eight different ciders available at the classy wooden bar, salvaged from an old bowling alley.

A mysterious, unlabeled bottle sits on the bar. It’s a golden brew when tilted under the bar lights appears to change to a darker amber at certain angles. On closer inspection, a little red pepper is swimming in the bottom of the bottle, causing the optical illusion.

It’s an exclusive first look at a product Good Intent has been experimenting with for two years. It’s now available.

“This is Eve’s Revenge,” Redding says. “This one’s only about a month old so you get more pepper flavor instead of straight spice. But if you let it sit for several months, it gets quite strong. We’ve got some that we’ve aged for up to two years now and they’re pretty potent. If you like spicy stuff, they’re pretty delicious.”

Thanks to the fluid nature of the process, Good Intent Cider is constantly experimenting and coming up with new flavors and products. What is available this spring and summer, might not be around forever.

“Some of them, we may only ever do once,” Redding says. “It’s sort of the nature of the business. People like variety. I don’t want to get bogged down in doing the same thing over and over again. The apples are not the same year-to-year. Some varieties are more prevalent in some years than others and we just kind of have to roll with it.”

Sourced from Adams County, the apples Redding uses are some of the best the state has to offer. Disease resistant and always fresh, they’re transformed to cider in Bellefonte, however.

What started as an operation in Gettysburg making 20 gallon batches, is now a much grander affair, evidenced by the rows and stacks of metallic equipment hidden from view by sliding doors. When you enter the tasting room, you do so through the side door. The little building opens up in front to reveal Good Intent’s fermenting, bottling and kegging space.

Redding points out a row of massive tanks that line the front room of the cidery.

“In those tanks, we have about 1,200 gallons sitting ready to go,” he says. “This one will become Good Charmat.”

The business has continued to grow and despite the limited space in the building, Good Intent made 2,400 gallons — and sold nearly every one. This year Redding says they are poised to make 3,300 gallons. A local favorite pear cider is already sold out.

Pretty soon, none of the tanks will be where they are now.

Good Intent is in the process of renovating a building down the street. It will become the birthing grounds for new, tasty ciders to make room for more patrons in the current building. Where the tanks sit now will soon be occupied by another bar and the bottling area will give way to more space for tables and for live bands to play.

The windows might remain as an ode to the building's history, however.

“We have to be very clever with the space,” Redding says. “The previous owner was going to make this an ice cream parlor. You can see in the windows, they’re stained glass ice cream cones!"

To learn more about Good Intent Cider, visit their website. Or simply stop in and have a glass.