Home > Bellefonte Historical Tablets: A Labor of Love for the Town

Bellefonte Historical Tablets: A Labor of Love for the Town 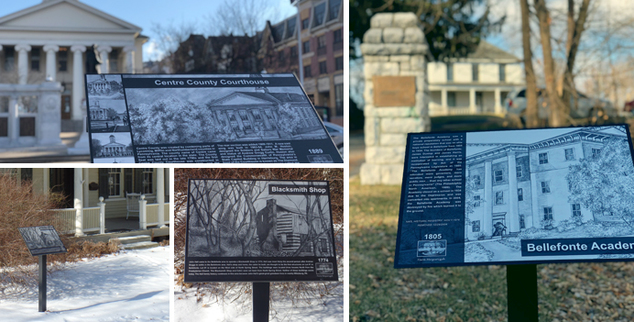 History typically unfolds on a big stage, in a grand theatre, with dazzling stars whose names become household ones that span centuries and more. For every Abe Lincoln or Martin Luther King Jr, for every Cleopatra or Amelia Earhart, there are hundreds, even thousands more, who once committed their lives to ensuring that the stories of an era and the tales of her people were told.

Lost down the years though are the historians themselves.

Living lives of basic obscurity, historians operate behind the scenes, their names often unheard of by the masses who benefit wildly from the work they do.

In a roundabout way historians may just be the most important historical figures of all. Without them, history might just be blown away on the wind, gone like it was never even here to begin with. They aren't perfect, naturally; historians are human, just like the rest of us, yet their efforts often help shape our lives in ways we don't even necessarily recognize.

And that makes them worth recognizing every now and then.

Which is why we need to talk about Susan Hoover and JoAnn Knupp, two Centre County women who have taken it upon themselves to bring something to the streets of Bellefonte that is long overdue. Hoover and Knupp, both well-known local history buffs, are responsible for the historical tablets going up now in town. You may have seen one or two even if you weren't looking for them. And that's the whole idea.

For some time now, as local history gurus, Hoover and Knupp have been trying in their own ways, mostly through work with various organizations around town, to help relay the deep and rich story of Bellefonte from her very beginnings. They both know that many folks who visit here- and many who even live here- know only the basics. They understand that Bellefonte is old, even by American standards, and then that's about it. Most of them, maybe even most of us aren't ever exposed to our area's rich past beyond that. The challenge then, for local historians, has always been bringing Bellefonte's history to life in a way that everyone, no matter how young or old, could notice and appreciate.

Doing just that has been a labor of love for Hoover and Knupp for years now.

That is until one day back in 2016 when Susan and her husband, Gary Hoover, who happens to be the Executive Director of the Bellefonte Intervalley Area Chamber of Commerce (BIACC) , were standing on the streets of Brookville in western PA. That's when it hit suddenly hit her.

"My husband, Gary, and I went to see what exactly Historic Brookville had to offer," Hoover explains. "Once we got there I told Gary that Bellefonte had ten times the history and we ought to get it documented! The interpretive signs using black and white older pictures on tablets directly across from their current buildings helped to tell a 'Before and After' for the town. And we thought it would be neat for here."

With that idea in mind, she came home convinced that she simply had to make it happen. Bellefonte deserved to have its story told right there on the very streets where it all unfolded, and Hoover threw herself at the task of making it happen one way or another. .

"Gary then organized a bus trip to Brookville to include BIACC members, Centre County Commissioners, and Bellefonte Borough people," she remembers. "JoAnn Knupp- as a BIACC Board Member went, and the rest is history."

The rest is history. Perfect.

According to Knupp, though, it was really Hoover's tenacity and blazing vision that made all the difference in the end.

"When I went on the bus tour to Brookville, I was impressed with what they did with tablets," Knupp recalls. "So, I decided I would do one tablet on John Dunlop only and put it down on Dunlop Street. He was actually the founder of Bellefonte, but his Dad and Uncle are given the credit -as you will see on the tablet on the diamond- because he was killed in one of his mines at an early age and his dad and uncle carried on his dream and mission. From there Susan and I got it into our heads to do tablets according to  the chronological development of Bellefonte’s history."

It hasn't been easy though. They has to get creative with funding. Eventually, with the help of Sally Houser from Historic Bellefonte Inc, the women have been able to apply for historical grants under the HBI umbrella. Lots of other people have gotten on board to help too, and now, because of a unified effort to honor this town's storied past: the project is airborne.

There are historical tablets depicting important people, buildings, and events in Bellefonte history going up all over town. Four 18x24" tablets have been installed so far at the William Thomas House (266 N. Thomas St), the Gamble Mill (160 Dunlop Street), Dunlop Parrish (Dunlop Street) and the James Harris House (S Thomas Street). In addition, in December borough council and the Historic Architectural Review Board approved 7 more tablets for installation. These include the Blacksmith Shop Site near N. Spring Street, the Dunlop House, Union Cemetery, the Meek House Site, the Bellefonte Academy, and the Forge House, as well as a larger 24x36" Centre County Courthouse one that's all set to go as well.

"The list (of tablets) we've developed covers 1774 to the 1930s in 10 different phases and over 5 tablets per phase," Hoover says. "But (there's the possibility for) potentially many more. That’s why bronze building plaques have been added as a companion to the Historic Street Tablets."

"JoAnn has one on her home that was built by Charles McCafferty on Spring St," she continues. "Our thinking is that the plaques are less obtrusive. One can only have so many tablets  in any historic district, but plaques are a really good way to document local building history. Scott Gardner from reMarkables is helping us produce those. At least 6 folks have expressed interest and they are more affordable."

All thanks to two Bellefonte women who wanted to help make the world a slightly better place... and just wouldn't take no for an answer.