'Do- Wop Til You Drop' with Rama-Lama at Summer Sounds 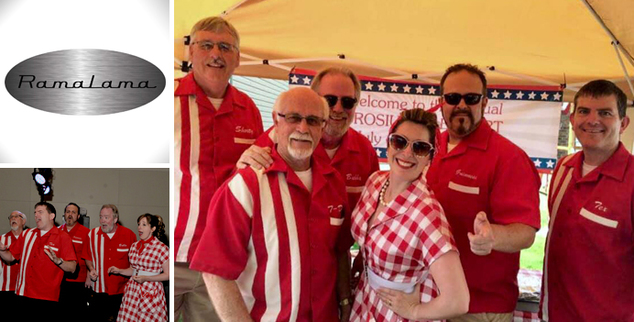 The first thing you should know about Do-Wop music, if you don't really know much to begin with, is that it's NOT Barbershop Quartet. Barbershop Quartets are cool and all, and they sure do sing with tight, sharp harmonies that stack together to create something sweetly nostalgic.

But what they ultimately amount to is an amalgam of ingredients that all mostly smell like vanilla. Which isn't bad if you like things that are...I dunno....safe.

However, if you are like me, and usually want your music with a hint more back alley dumpster, a bit more grit and...forgive me, but it's true...SOUL(!)... then you should probably listen to Doo-Wop sometime soon. Because she is quite possibly one of the most soulful styles of music America has ever created. And with humility in my heart, I gently point out to you, dear reader, that America has created pretty much all the soulful stuff out there.

But listen: don't take my word for it.

You can do way better than me on the community totem pole when it comes to finding a ringing endorsement for Doo-Wop music. As a matter of fact, you can almost go straight to the top if you really want to.

See, it just so happens that Mayor Tom Wilson, the man who helps run the show here in Bellefonte, is also a Doo-Wop lover and performer. RamaLama is the name of his six-person group, and they'll be the headliners performing this Sunday, July 7th, at the Gazebo in Talleyrand Park, the latest in the Summer Sounds concert series being brought to you by the folks at the Bellefonte Historical and Cultural Association.

And it's his own words that probably sum up the whole Doo-Wop thing best.

"Doo-Wop is a style of music born from early rock and roll plus Rhythm and Blues," explains Wilson. "Pure Doo-Wop is all a cappella. The articulation is loose and the rhythms are comprised of nonsensical sounds, thus the name. It's often confused with barber shop but only sharing the similarities of a cappella and harmonies."

You see what I mean? He gets it. The mayor gets it. And so do the other five members of RamaLama. Heck they even named the group after one of the more legendary 'nonsensical' sounds in musical history.

But Doo-Wop is also, in many ways, an endangered species, a slice of Americana that has been largely forgotten as generations pass and the 1950's and 60's slip further and further away from our current collective consciousness. What once practically defined grassroots urban singing in mega metropolises like Baltimore, Philadelphia, and New York City, is now kept alive by the few and far between who recognize that this music, these songs, they were a remarkable part of cultural canon.

The best Doo-Wop performances once seemed unforgettable. But like so many things of beauty and works of art, they have been all but evaporated by the modern relentlessness of time, change, and nothing stays the same.

Sometimes though, all it takes is one group. Just one gang that wants desperately to let you know about something that moves them deeply, in ways that are kind of tough to even explain. And that's what's going on here, I figure. Mayor Tom and his RamaLama bandmates have serious passion for this genre. It's a lifelong thing. A calling, if you will. A purpose in spreading the word...be it the nonsensical ones or the illuminatingly brilliant ones that also walk the lonely streets of Doo-Wop night after night, with a broken heart. Or a singing one.

For Mayor Tom, the love goes way back.

"I've always loved harmonies," he recalls. "Two part, three part and beyond. Plus being a child of the 50's-60's put me right in the pocket for this unique style of R&R and R&B. It was just part of growing up for me. I started performing Doo wop in the 80's with a group that was formed via the Penn State Free University initiative of that time. Frank Fox, a original member of Vito and the Salutations who had national hits with Gloria in 1962 and Unchained Melody in 1963, and appeared on Dick Clarks American Bandstand - was the course instructor. A group named Doo Wopp Inc was formed and performed in this area during the early 80's."

But eventually the group disbanded and Central Pennsylvania was left with lots of music, but absolutely no Doo-Wop.

Until one day when Wilson had had enough.

"In late 2015, I thought, lets do this again. I recruited our first member, bass singer Jeff Brown, well known morning DJ from WBUS the Bus. I ended up building the group like a house from bottom up. Baritone John Zimmerman, who's retired Bellefonte music teacher. Tenor Luke Lorenz, then second tenor Eric McGinnis and his wife Amelia to cover the female leads."

And did it work? Did people here in the Appalchians still still care about a fading city slicker like Doo-Wop?

You're darn right they did. Big time.

RamaLama has performed practically everywhere since they joined forces. They've played all the big arts festivals. They've done the State Theater in State College. They've appeared at countless popular car shows all over the state as well as a bunch of fundraisers for causes near and dear to them.

And through it all, they have managed to bring this magic music back to the people, back to the regular working folks and family people who originally fell in love with it many Blue Moons ago. That's quite an accomplishment in this day and age where everything seems disposable and the chances of practically anything having a shelf life longer than a few weeks, maybe a month, is slim.

This Sunday, treat yourself to the bygone sounds of an America that still very much exists.

Because we are still walking around with broken hearts

Because we are still staring up at the stars and wishing for one true love.

Because we are still just goosebumps and rushing blood whenever one voice collides with another- and then another still- to sing a song that cuts through the long night and shoots straight into our longing hearts.

'You are not alone', the singers tell us.

And that, in the end, is everything.