Home > Old House Fair on the Road Brings Restoration-Heads Together

Old House Fair on the Road Brings Restoration-Heads Together 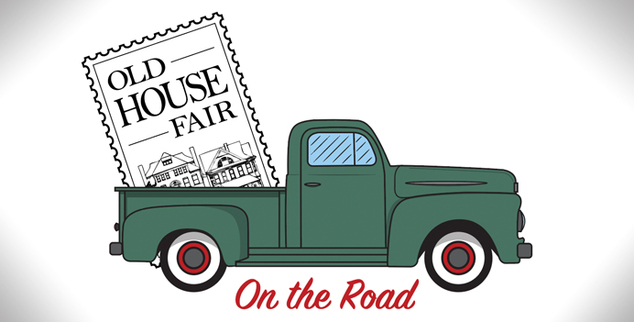 Over the past 30 years, the Old House Fair has sort of gone the way of an old house. Lots and lots of changes, but still standing...strong and proud. The idea of bringing together Restoration-Heads (yes, I created that name for people who love restoring old houses...and YES: it's brilliant!!!) decades ago, someone out there can claim it as their own. But I don't know who that person is, or persons are. Time, as we know, has a way of bashing the old shiplap with wind and rain, with snow and sun.

Still, one fact remains. Centre County's Old House Fair is a beautiful three-headed creature thriving in a world where so much change is coming at us so fast every single day. How the Centre County Historical Society partnered with the Bellefonte Historical and Cultural Association and the American Philatelic Society to create and perpetuate this annual local gathering of old house lovers is perhaps a story for another day. For now, Restoration-Heads can simply thank their lucky octagonal towers that the fair is alive and well. And happening right now.

This year's event, unlike recent fairs, is not unfolding as a single conference. Instead, the minds behind it have come up with a newer fresher idea.

"Let's take the fair to the people!," they seemed to have said to themselves. "Let's take this baby on the road!"

And when you think about it: that's a pretty darn good idea. Why? Well, basically because this area is LOADED with spectacularly old homes and properties that exemplify just about every possible angle any East Coast American Restoration-Head could ever be hungry to learn about. From Bellefonte's famed Victorian houses and mansions to some of our more rural valley's throwback farms, Centre County is a literal hotbed of restoration waiting to happen....or waiting to be showed off, as it may be.

Two events highlight Old House Fair 2019, and each of them is special in its own way.

Restoration of the Leonard Rhone House

This past Sunday, a very exclusive and limited crowd (who were lucky enough to get an early reservation) were treated to a free in-depth look at one of our area's most unique properties over at Penns Valley's Rhoneymeade Sculpture Garden and Arboretum. James Lesher, the Executive Director of the arboretum, presented an illustrated talk about the history and retoration of the Lenoard Rhone House which has been the main home on the property since 1853. Rhone was the grandson of the original settler, Michale Rhone. Leonard Rhone, incidently, also just happens to be the founder of a little popular event known as the...ahem...Grange Fair.

Seated on a ridge between two famed local peaks, Tussey Mountain and Nittany Mountain, Rhoneymeade is a 150 acres of remarkable Pennsylvania history dating back to 1794.
The land has been steadily farmed for over 200 years. Which, in a valley who's very essence and culture has been farming-influenced all along, that fact alone makes it a great grandfather of a farm overlooking all the other younger farms that have spread out around it for miles and miles.

Fascinated by the fact that this arboretum is a living history tribute to some backwoods Pennsylvania settlers who were basically showing up to try their hand at living in an untouched wilderness, I reached out to Lesher to learn more.

And he really knows his stuff.

"Laying out the historical context and the landscape for folks during that time would be a worthwhile discussion," Lesher points out. "Besides the vivid imagery of Indians using the spring on the property or the massacre at the Standford Cabin two doors down, the fact that the property is on the edge of what was known as 'The Great Plains ', interested people during the Centred Outdoors walk/talk this summer. Indians cleared the area by fire to hunt, apparently."

But how did the Rhone family ever come to settle here?

"A few decades prior to Michael and Catherine settling," explains Lesher, "the state's deputy surveyor laid out a 1,000 acre manor (1766) for the proprietaries which included the now Rhoneymeade farm, and along the southern boundary of that mayor's survey, reads 'open barrens without timber'. By 1794 then, the landscape, no longer regularly burned, could have been succeeding into a wild and untamed place. Much later in the 20th century, W.T. Westerfield, an area plant expert, and later still, a PSU doctoral student Losenski, described plant associations which were unlike any in PA, representing prairie species/associations which were theorized to have migrated into the area following the Indian burns. It's all fascinating and there are experts who can describe it much better."

Maybe there are. But in just a few sentences, James Lesher has made me want to go visit the grounds and dig up as much as I can about these folks who came here when so much of this county was a wild frontier.

For Old House Fair fans and Retoration-Heads, Rhoneymeade Arboretum was a sensational choice for a 2019 event, no doubt. But even if you don't know much about architecture or buildings, Rhoneymeade has so much to offer. This is a critically important part of our collective history in a lot of ways. Out there on Rimmey Road, where the leaves are just beginning to hint at autumn coming round the bend, there is a place where culture and art mingles with nature and history. And that, to me, is what makes this such a one-of-a-kind place to live.

"I have tried to care for and understand the Rhone House as best I can and within our means," James Lesher reflects in the end. "Sharing discoveries about the House and watching people light up about this detail or that is rewarding. Figuring out the new social dynamic for the House, one which is communal and public/private has been a fun challenge. I am most proud that our organization inherited the house and farm successfully and continue to improve upon our offerings to the public. We have garnered more and more help over the years from individuals and organizations. The Old House Fair is just one example, and, we could not exist without Centre Foundation, as another example."

We take that sort of thing for granted when we're running from work to Little League practice, from the grocery store to pick up the kids at your mom's.

Places like Rhoneymeade exist to help us slow down for an hour or so, take a deeper breath, and look around at just how lovely where we come from really is.

There will be a big fundraising Pig Roast at the Arboretum on October 26. The leaves will likely be peaking around then and there will vegan options and kid's activities too. Plan your first (or tenth) visit that Saturday if you can.

The second stop on the 2019 Old House Fair road trip will be at Centre Furnace Mansion, that esteemed and regal home of the Centre County Historical Society on the outskirts of downtown State College. This Saturday, September 28th, the Fair folks are bringing renown Colonial Williamsburg cabinetmaker and woodworker, Kenneth Nuttle to town for an all-day wooden window restoration workshop.

This is a very rare chance to get hand-on experience removing and restoring actual windows with an expert, because the plan is for Nuttle (with your help!) to actually take two of the mansion's own windows out right before your very eyes. Then he'll show you every little thing you need to know about restoring historic windows instead of replacing them.

Nuttle, who has also served as a Professor of Preservation Carpentry at the American College of the Building Arts in Charleston, SC will "walk attendees through gently restoring historic windows from removal and reinstallation of the sashes, painting and glazing techniques to repairing broken cords," according to the Historical Society's website.

"Through this day-long workshop," the site explains,"Nuttle hopes to provide enough hands on experience, information and inspiration to encourage homeowners and professionals alike to embark on a rewarding DIY home improvement project."

Plus...and I know you were worried about this...you'll also be treated to lunch. So don't think your stomach is going to be growling to the point where you might start considering a pane of old glass as a snack. You won't have to; they're going to feed you well.

This all goes down THIS SATURDAY, September 28th, from 10am-3pm. The workshop fee is $50 and is limited to only 20 people, so you won't be craning you neck to catch what Kemmeth Nuttle is showing you, either.

Go learn how to keep these original eyes to the world intact and lasting. Original wooden windows have seen a lot, and they're a huge part of the defining character and charm of these amazing old homes that surround us here. Be one of the champions for saving them. Go learn how to do it the right way. You'll be preserving more than antique glass, my friend.

Because that's just what Restoration-Heads do.