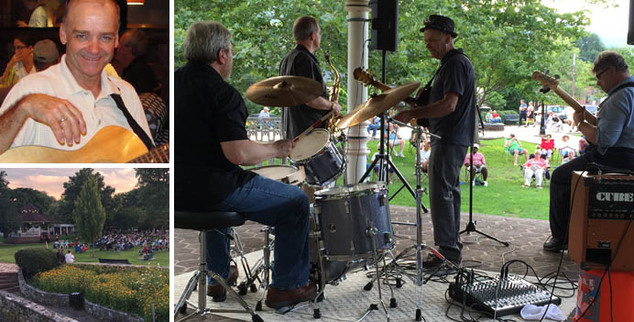 This week's 'Sumer Sounds' concert at the Gazebo in Talleyrand Park welcomes a native son back home. Of course, the July 14th headliner, Tommy Wareham, hasn't ventured all that far even to this day. Born in Bellefonte, he now calls State College home and performs there a lot, mostly on his piano with his regular gig at the American Ale House.

Throughout his life, he's fronted rock-n-roll bands and performed solo shows, the son of a Penn State Music Appreciation instructor who felt the tug of performing at an early age and followed it down. Now it brings him full circle: back to Talleyrand, to his old stomping grounds. As the summer marches on and the Bellefonte Historical and and Cultural Association's annual 'Summer Sounds' series again proves to be something this town cherishes, it's worth noting that the variety of performers that have graced the stage at the Gazebo- both this year so far, and in summer's past- really do bring a special vibe to the banks of Spring Creek on Sunday evenings in these warmer months. I know it sounds cliche to say that the the town is lucky to have an event like this, but it's true! We ARE lucky!

And so taking the time to recognize the fact that local folks who have been making music for a long time, whether it's the grandmother down your street still giving piano lessons or the mayor of Bellefonte himself, still Doo-Woppin' the night away with his bandmates, that's something worthwhile. These are strange days we are living through right now. It's good to know that the power and possibilities of music still very much exist right beyond our own front doors. And maybe, even hopefully, in our living rooms as well.

Plenty of people in attendance at this week's concert in the park may have seen Tommy Wareham before. His presence and the sound of his voice is a as familiar to many around here as so many musicians of fame. And that right there is a testament to his decades of hard work. And to his commitment to the cause- the one that all musicians, from superstars who fill football stadiums to solo artists singing over in the corner of the coffee shop- is the uniting strength that bonds him to the rockstars on our TVs and radios. He's been around the musical block. He's played a thousand gigs for next to nothing and to crowds that were sometimes thousands strong, sometimes just a face or two hiding back in the shadows.

Long story short, Tommy Wareham has been a critical thread in the tapestry of the Centre County music scene for a long time now.

He has paid his dues and he continues to pay them just by making people smile almost every night.

That's a heck of a legacy to have in the crazy world, I think.

We could all use a few more of them if you ask me.