Home > The Mystery of a Ukrainian in Bellefonte: Can You Help?

The Mystery of a Ukrainian in Bellefonte: Can You Help? 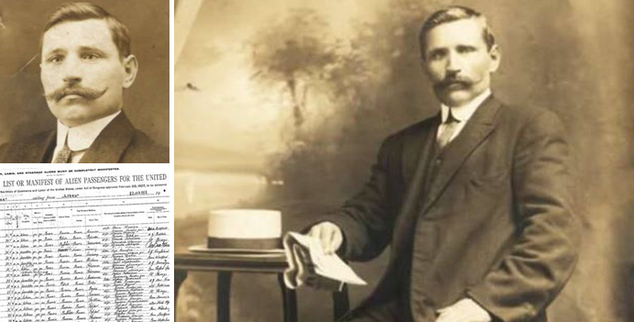 My guess? There are probably more amateur historians in this neck of the woods than in any other area of Pennsylvania. Which is why I'm aiming this little mystery we've run into at our readers.

The way I see it, there is a real good chance that someone out there knows something. Or knows how to know something.

So let's do this.

Mark Dello Stritto, owner and editor of Bellefonte.com and partner at local advertising agency 321blink, received an email not long ago concerning a possible article idea. Nothing unusual there, except this email came from a gentleman in the Ukraine. And as Mark wondered to himself the same exact thing that I would if I got an email from a stranger in a faraway land... Is this some kind of scam? But, he refused to just dismiss it outright. Good thing too, because what in fact transpired as he read through the words a few more times was this sudden realization that what he was looking at was not only genuine, but it was also pretty darn remarkable.

See, the person on the other end of the email was named Serhii Telizhenko and it turns out that Serhii was on a mission of sorts. He wanted to trace the American footsteps of his great-grandfather, Korney (or Kornii) Proskurenko, a man who'd left his family behind and emigrated to the United States from imperial Russia right in 1913, just a year before revolution and war broke out.

What made all of this come alive for Mark and I though was this couple of parting sentences that concluded his original email.

‘Send you the picture of my great-grandfather who lived in Bellefonte probably from 1913. At the bottom is an inscription ''The Mallory studio Bellefonte, PA''. Good luck!’

Sure enough, there at the bottom of the email, Serhii Telizhenko had attached two sepia-toned photos of his great-grandfather. In them you see a handsome, serious-looking man with a championship mustache and a fine suit of clothes. But there was nothing stand-out about the photo; for all intent and purposes it could have been almost any fella from that era. It could have been taken pretty much anywhere too.

Apparently it was taken at a photography studio that once existed right here in Bellefonte, Pennsylvania… precisely 4,222.839 miles from the port of Libau, where Korney Proskureno had caught his ride to the New World.

Which leads us straight to our little mystery, folks. Did Serhii’s great-grandfather live here in Bellefonte once upon a time? Or was he just passing through? And if so, where was he going? And why?

Also, what about the Mallory Studios? Where was that? And who was Mallory?

Obviously this isn't the kind of mystery that's life or death. But in a way that's what makes it attractive, I suspect. Maybe local people can help out a guy whose distant life is somehow intertwined with our own in a roundabout way. It's a reminder, really, that we are all kind of in this thing together.

In email and Facebook correspondence I've had with him, Serhii Telizhenko comes across as bright, funny, and super curious about his great-grandfather's life in America. I asked him what else he could offer us to help us on our quest.

"I know of my great-grandfather from my grandmother, to whom I came from the city of Lugansk in Eastern Ukraine every summer," Telizhenko recalls. "Unfortunately, I remembered a little, because, like all children, I was inattentive. But it was very strange to see that there is an elderly person in the Ukrainian outback who is more or less fluent in English. Of course, he was married, but no one can tell me this information because those who knew died. He had 4 children, one boy Basil (Vasyl) and 3 girls Harytyna (my grandmother was born in 1905), Anna and Theodosia."

What did your great-grandfather do, I asked him? And how long was he here in the US?

"Most likely he was a farmer, but in 1913 decided to go to the United States for work," Telizhenko says. "With him, according to the passenger list, there was another man from his village, Ivan Syes. He (my great-grandfather) returned from America in 1927 after the WWI. That is, he spent 14 years there. I took the photos from my grandmother's house. The house was built in 1905 and after her death, it was decided to sell and I came with my father (it seems in 1995) to collect something for memory. I got these two photos. They are very good quality. Hanged on a wall in a bedroom in an old house."

So what we know is pretty much this. Proskureno was still a relatively young man of 34 at the time he landed at Ellis Island on the day after Valentine's Day. Records show he'd come across the world on a ship named the Birma. Side note: the Birma was a Russian ship which only months before had ventured off course to respond to the distress calls of another ship in trouble not 100 miles away.

That other ship was called the Titanic.

After doing what research he can from the other side of the world, Telizhenko is pretty certain that his great-grandfather ultimately made his way from the early 20th century Ukrainian enclaves of Passaic, New Jersey and headed west. To Pittsburgh, to be exact, where the Russian immigrant found work in a steel mill.

Somewhere along the trail though, he landed here, in Bellefonte. And while he was here he seems to have had his photo taken. But I can't find any superficial records of him having lived here in the town. His name doesn't bring any direct Bellefonte-related hits on Ancestry.com or anywhere on the Internet, for that matter. Was he a resident? Was there ever any kind of influx of Ukrainians here for work?

Serhii doesn't know a ton, but from what he does know, I'd say his great-grandfather lived a pretty fascinating life.

"I don't know why Korney decided to go to Bellefonte, but I do know that he worked at a steel factory in Pittsburgh. But it seems to me that he spent his best days at Bellefonte. Otherwise, it is difficult to explain why he was photographed in this city."

Then he adds one last thing.

"Now I will write something that may interest you. After arriving in Ukraine, which was no longer Tsarist Russia but the Soviet Union, the Soviet authorities confiscated all the money he had brought with him (only a gold clock remained. Where that is, I do not know). The money was confiscated on the receipt, they say, they will go to the construction of a young Soviet state. After some time the depreciation (high inflation) was returned to him, but then he was accused of surplus money, for which he was evicted from his family to a neighboring village, where he spent his life until his death (in 1953). My father had never heard of him because it was forbidden. He recalled today that when he was in grade 5, the principal came and said his grandfather had died and he needed to go. He and his brother went skiing for a few kilometers, and for the first time and the last time in his life he saw his grandfather."

See what I mean? I want to help Serhii out. Hopefully you do too. Social distancing has put us in the house lately, but here's a chance to put all that inside time to good use maybe. There are some darn good historical sleuths out there in Centre County.

Use our Bellefonte.com Facebook page to let us know. Or just send us an email at hello@bellefonte.com if you'd rather do it that way.

We'll keep you updated once we see where this goes.