Home > Thomas Edison and his visit to Bellefonte’s Markland Hotel

Thomas Edison and his visit to Bellefonte’s Markland Hotel 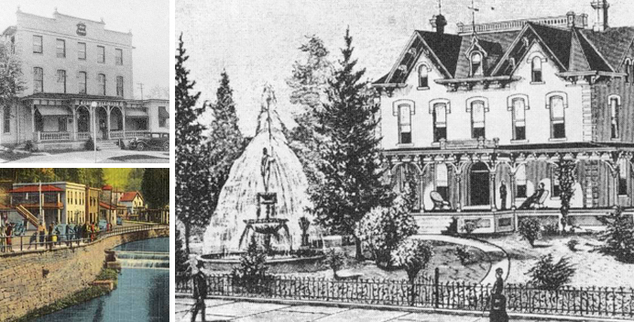 By Dale Moore, in partnership with Bellefonte Victorian Charm

Imagine it is the 1920’s and you are the most famous man in America and you can stay in any hotel you want. What historic Bellefonte hotel would you want to stay in? The Bush House, the Brockerhoff, the Haag Hotel? I’m going to tell you about world famous inventor Thomas Edison and his visit to Bellefonte’s Markland Hotel. Never heard of it? You are not alone.

The owner of the Markland Hotel was Marcus Landsy who was born in in Germany in 1873. Landsy moved to Philadelphia where he made a living as an oil portrait painter and was a partner in the firm of Antrim and Landsy. He travelled across Pennsylvania soliciting and completing portraits of the wealthy residents of the time. Landsy often stopped in Bellefonte during his travels. In 1903 he decided to make Bellefonte his home.

In 1921, H.S. Ray retired as the landlord of the Brockerhoff Hotel. Landsy was talked into taking over the hotel in April 1921 and immediately remodeled and refurbished the Brockerhoff. He opened the hotel for public view in May 1921.

In 1925, Landsy took advantage of the opportunity to buy one of Bellefonte’s finest buildings, the grand 1864 Victorian residence of Daniel Bush. The 123 South Spring Street home is the current home of the VFW. Bush, the namesake of the Bush House Hotel, died in 1886. Landsy bought the home and called it “The Annex.” The purpose at the time was to provide rooms and operate as an overflow for the Brockerhoff. In 1925 he had three apartments on the first floor and five rooms with two beds in each on the second floor. 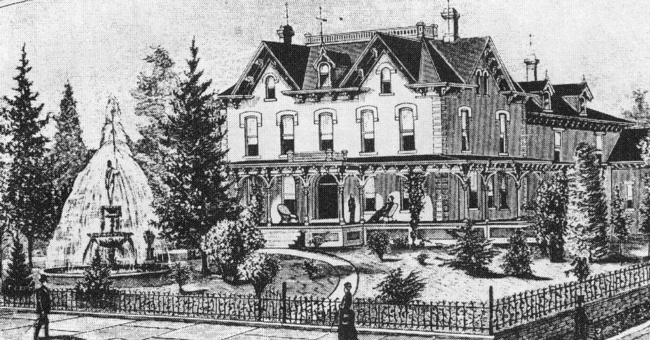 In 1926 he finished a third floor and added five more rooms. By 1928 the place was flourishing and he put an addition on to the home which took residency to 18 hotel rooms plus the apartments. Landsy and his wife, Blanche Landsy, lived in one of the apartments. The original Bush home lost much of its ornamentation with this addition. The Hotel was now being called the Markland Hotel.

In 1929, Landsy added fire escapes to the building and in March of that year, he had the roof painted with the word Bellefonte. The letters were 5 feet high and 4 and half feet wide. The word Bellefonte reassured Air Pilots flying over they were going the right way to Bellefonte’s Air Field.

On August 2, 1929, Thomas Edison, his wife and her brother, Lewis Miller stopped at the Brockerhoff Hotel seeking a room for the night. They were traveling from her hometown back to their residence in New Jersey. Mr. Landsy was working the desk when Edison arrived. Landsy informed Edison that they have built one of the finest hotels in Pennsylvania just down the street if he would like to try it. Edison agreed, was given directions and said he would walk. He turned the corner where the Bellefonte Wok is today and walked in a straight-line down Cherry Lane to the Markland. 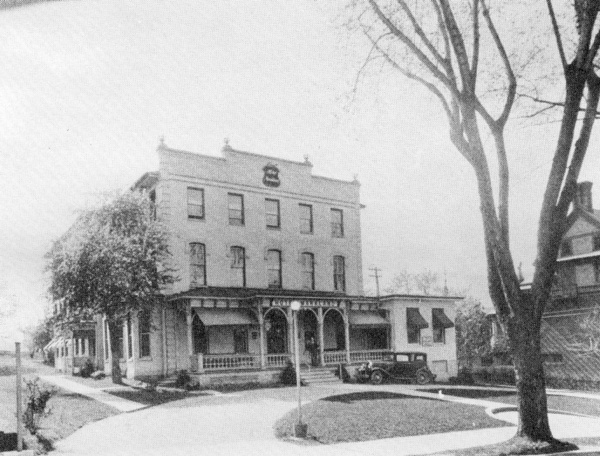 Thomas Edison was asked to sign-in with his own handwriting and he obliged. He only hesitated for a moment when he asked his wife how to spell the name of their chauffeur. At the time of Edison’s visit, the Markland did not have their own restaurant. Mr. Landsy sent food down from the Brockerhoff.

Edison told others that he had been to Bellefonte before, in 1926, and was taken to see the big fish at the Big Spring. He asked if the fish were still there and the next morning, he had the chauffer pull over along Water Street. They saw Charlie Brachbill feeding the trout chopped beef. Brachbill offered Mrs. Edison some beef to throw and she took a turn throwing the beef to the fish. 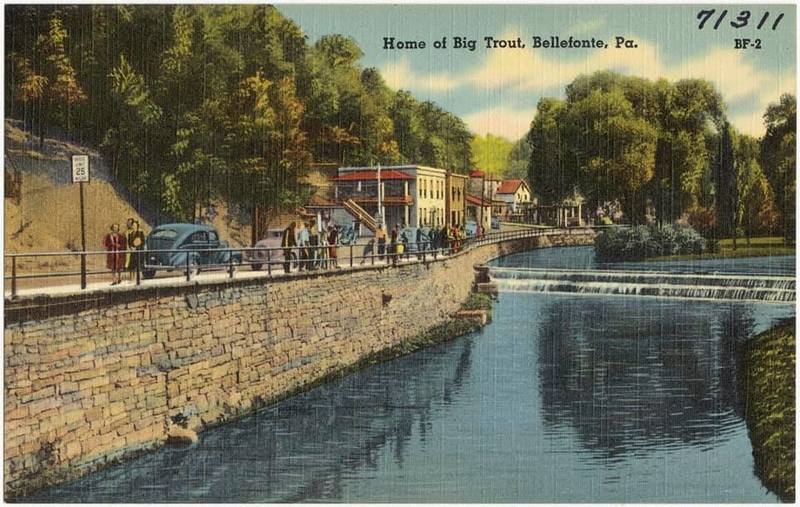 Where Edison pulled over to feed the fish. Fred Smith Collection 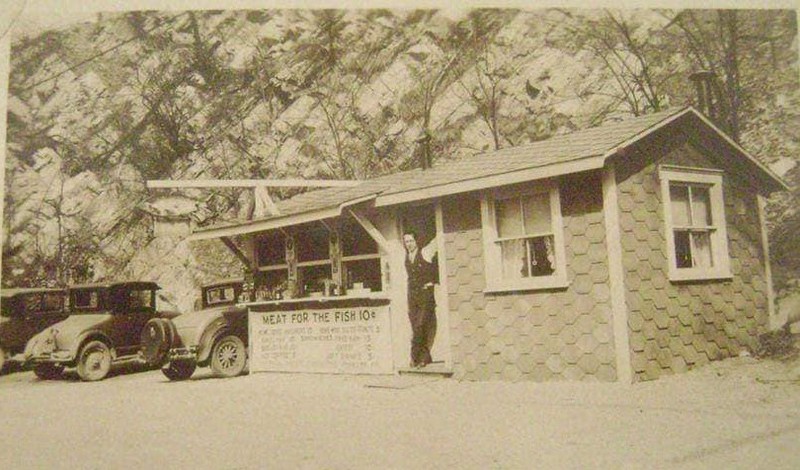 Wesley Jarrett, an employee of the Democratic Watchman newspaper office, saw Thomas Edison looking at the fish. Jarrett said he was relieved to know others saw and recognized Edison too, as he was afraid no one would believe him when he told the story.

I was able to confirm that Thomas Edison had been to Bellefonte in August 1926 as he reported. The Democratic Watchman at the time said Edison and his wife as well as her sister, Mrs. J.N. Miller, had stayed at the Brockerhoff. They arrived in a large Lincoln Town car. The Mayor at the time, Hardman Harris, went to the hotel and escorted the Edison group over to the Big Spring to see the fish. The other person who spoke to Edison the most, was the bell boy for the Brockerhoff. Edison told him he placed the first electric lights in Bellefonte over 40 years earlier. The newspaper article at the time said a charter was granted on July 25, 1883 to the Edison Electric Company. It reported W.D. Rich, the Vice President of Edison Electric came to Bellefonte to install the lights after installing the first electric plant in Sunbury.

The article continued by saying on February 4, 1884, the electric lights were turned on for the first time with a banquet being held at the Bush House. The newspaper said: “The great dining hall of the Bush House was brilliantly illuminated with 13, ten candle power lights.” It was reported the first light actually flashed in the law office of General James Beaver.

There is much written about Edison’s connection to Bellefonte. While the newspapers do not mention Edison as actually being at the Bush House or staying there during installation of lights, I have seen it mentioned in other places over the years. It is sometimes hard to separate fact from fiction.

So, what ever happened to the Markland Hotel? Another addition was added in July of 1930 and a restaurant was added. On March 31, 1931 Mr. Landsy retired from the Brockerhoff to work full-time at his Markland Hotel. Things were going great. In 1931 he hosted the Colgate Basketball team after they scrimmaged the Bellefonte Academy team. Unfortunately, in May of 1931, Mr. Landsy became ill while speaking to guests in the hotel dining room. He was taken to his room where he died.  He was 58 years old.

Mrs. Landry, was only 39 at the time of her husband’s death. She took over the hotel business but she too became ill 7 months later and died. The Landry’s had no children. Luther Musser was the manager of the Penn Belle Hotel and became the manager of the Markland Hotel upon the death of Mrs. Landsy.

Another famous visitor of the Markland Hotel was Governor Gifford Pinchot. Pinchot ate dinner and stayed at the hotel on his visits across the state. He spoke at the steps of the Centre County Courthouse. Pinchot was publicly against the use and sale of liquor. When prohibition ended, Pinchot helped form the Pennsylvania Liquor Control Board to “discourage the purchase of alcoholic beverages by making it as inconvenient and expensive as possible.” Interestingly, the Markland had the first and only bar in Bellefonte immediately after Prohibition ended and still operates as the Bellefonte VFW, Post 1600 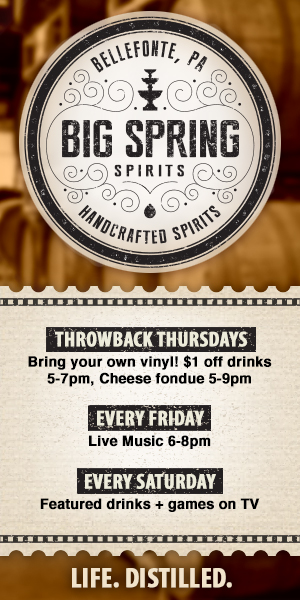