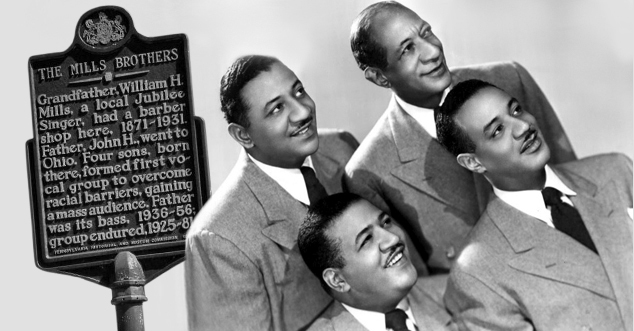 If you’ve ever sat and enjoyed a beer or a burger in the Governor’s Pub on Bellefonte’s West High Street, chances are that you had no idea you were pretty much sitting smack dab in the middle of a magnificent tale.

I’m talking history, American history. And a lot of it. The Underground Railroad. Escaped slaves. Freedom from chains. Bellefonte played a huge part in the turning of the slavery tide. And once upon a time there was a small barber shop right there where that historical marker is today, a shop owned by an African-American man by the name of William H. Mills.

Now I don’t know my barbershop history all that well but I’m going to go out on a limb here and just say this. That barbershop ended up being one of the most important barbershops in the history of the world.

The legendary abolitionist, Frederick Douglass? They say he once got a haircut there while visiting town. Frederick Douglass! In Bellefonte! How wonderful is that? Think about that while you’re ordering another cold one there at the Governor’s Pub.

But more significantly, that little barbershop that sat there on West High Street was owned and operated by a man whose four grandsons grew up to form a vocal group called The Mills Brothers.

And The Mills Brothers, in case you haven’t heard, were one of the most important musical acts that ever happened.

The next time you have a couple of spare minutes you need to walk into Plaza Centre Antiques over at 124 West High Street. Walk down towards the back of the old theater building and find the glass display cases housing a bunch of old Mills Brothers records and photos and stuff. It's worth your time; trust me. It’s a reminder that Bellefonte has such a strong connection to these fellas.

Who were they then, The Mills Brothers? John Mills, Jr.; Herbert Mills; Harry Mills; Donald Mills; and John, Sr., their dad. They’re just names from long ago now, but why are they still such a vital part of both our local and national past?

The way I see it, even though the four original members of the group were born and raised in Ohio, their epic story really does start here - in Bellefonte, Pennsylvania - and in so many ways. Their grandfather’s barbershop, Bellefonte’s reputation as a safe place for slaves fleeing slavery, it all swirls into an amazing tale. My hope is that you’ll pursue it a bit on your own. I’d be proud if I turned you on to them. This Pennsylvania Heritage article from a few years ago is about as good a place to start, as you’ll find.

The group’s musical legacy is astounding and their success was both immense and lasting. So I know I could delve into how their four-part vocal harmonies literally took the world by cultural storm in the early 1930’s and spawned a career that spanned four decades, but even me saying that to you is like me offering you the tip of an iceberg for lunch.

Their single ‘Paper Doll’ sold over 11 million copies, I’d tell you that for sure. But that’s just one hit song. They had a lot of hits, people. The Mills Brothers were more than chart-toppers. They were international recording megastars.

They once performed for the King and Queen of England… the first black performers to ever give such a command performance. Imagine that for a moment. Think about what that actually indicates, about the experiences these four brothers had. At the same time, think about the ripples their accomplishments at the time had on the entire world.

Oh yeah, I could mention to you that The Mills Brothers surely influenced more American music legends than almost anyone from that era. Even the highly untrained ear can easily detect the telltale signatures of their sound in Bing Crosby’s lush presentation. Or in Billie Holiday’s phrasing. Or in Louis Armstrong’s smiling voice.

They were the first boy band in a lot of ways.

They were the first pop stars in a lot of ways, too.

The list, you know, it goes on and on and on.

Still, despite all of their accomplishments across an unparalleled career what I really need to stress to you today is this. The Mills Brothers, these four guys with strong family roots spread all up under this town called Bellefonte, these guys arguably did more for racial equality in the eyes of the world than any other musician or performer who had ever come before them. Or maybe even since them, too.

They broke monumental barriers with music and song. Born up out of the old Negro spirituals that slaves sang in the cotton fields, these four brothers (later their father) took vast ugly stretches of American history and made something magical and beautiful out of it. Then they took what they created to the world and the world ate it up.

Not many small American towns can lay claim to a role in such a wonderful tale, you know?

But Bellefonte sure can.

I dig that so much.

There are a lot of Mills Brothers records here. All the different antique joints in town always seem to have at least a copy or two of one of the group’s albums or singles. I guess in a way that that figures. I mean, they sold so many records that there’s bound to be a bunch of them floating around still.

For some reason though, whenever I’m out poking around town on a Saturday afternoon, looking for a record or two to add to my collection, and I run across a Mills Brothers’ album, I always feel like I’m in on something pretty special. I can’t explain it. I just do.

It’s like: there I am digging through crates of dusty vinyl, breathing in the mildew-y past, sucking up history in a very certain kind of way and suddenly, BOOM, there they are! The Mills Brothers, staring up at me from a cardboard box on the floor. I feel them the most right then and there, their presence all around me, like some four-part harmony band of ghosts hanging out just behind the walls of whatever Bellefonte antique shop or thrift store I’m in at the time.

I always love it when we meet like that.

Then if it’s one of their records I don’t already have, I put it on my stack to buy.

But if not - if I already own that one - well, I prop it up, front and center, so that whoever wanders over to this box tomorrow or in two weeks or whatever, they’ll end staring straight into the eyes of a song well worth remembering.

Check out some of their most famous songs here:

You Always Hurt The One You Love